Way back in November 2013 I started my journey through the book 300 Beers To Try Before You Die! by Roger Protz. I haven’t posted since then, but it doesn’t mean I haven’t been working (well, you know, drinking).

One thing that I decided early on was not to give a score to any of the beers. Scoring something based on how much you enjoyed it is so subjective and, furthermore, leaves little or no room for higher scores if you think you found your perfect ten or 100% beer before you’ve tried all the other beers in the world first. Instead I opted to write whether I’d drink it again or not. This will be of limited use to you unless you find yourself liking most of the beers I’d drink again. The beauty is in the eye of the beholder! 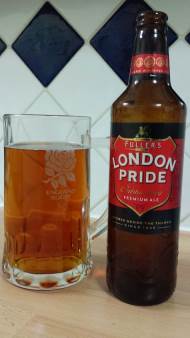 Bottle blurb: “London Pride has a smooth, distinctive malty base, with a rich balance of well developed hop flavours from the Target, Challenger & Northdown varieties and our own unique yeast in the brew. An impressively complex beer. The UK’s favourite premium ale.”

Earthy, clear golden brown. An ale with a solid base. The branding normally puts me off buying this because it doesn’t scream ‘rustic pub in the countryside’, but branding aside, I’d drink this again. 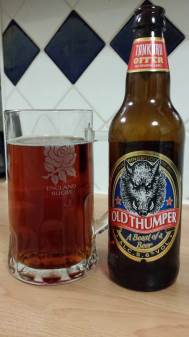 Bottle blurb: “Old Thumper delivers a deep brown strong ale with a spicy fruity hop aroma and a warming malty finish. The distinctive taste has made it a champion Beer of Britain.”

Rich brown in colour. Light spicy taste, not earthy. There’s something nice about this which prevents a lasting bitter aftertaste. I’d drink this again. 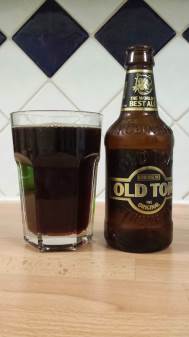 Bottle blurb: “Old Tom is a legend amongst beers. First created by the Robinson family in 1899. It is a wonderfully warming dark strong ale, with aromas of dark fruit and a palate booming with ripe malt and hops, slowly followed by a deep port wine finish. Not surprisingly Old Tom has won almost every brewing accolade including being voted The World’s Best Ale.”

Very dark brown with little head. I looks much like flat cola. It has a strong flavour that I’m not experienced enough to identify. They’re right about the port finish though. It’s nice enough, but it’s strong, so I probably wouldn’t choose to drink it. 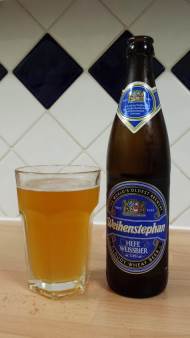 I read a little about this one before drinking it and can pick out the banana and clove flavours. Perhaps it’s not as easy-going on the taste buds as Hoegaarden, but I quickly got into the flavour once I had an understanding of what the flavours were. I wonder if I had chilled the beer too much. Worth noting that the 300 Beers book is quoted on the back of the bottle. I’d drink this again. 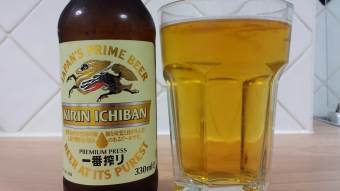 Bottle blurb: “Ichiban Shibori is a process by which beer is made from a single first pressing of the finest ingredients, giving you the sweetest, most flavoursome beer every time. Only Kirin Ichiban is made with such uncompromising standards, for a purer, superior taste.”

Certainly a very crisp and refreshing beer. The book tells me that there is a “lilting lemon grass…aroma”. I can’t smell it, but I think I can taste it. I’m not detecting any strong flavours, though I can tell that it’s a strong beer. If I could only have one drink at the end of a day of hard labour, this would definitely be one of my options. As it turned out, the photos that I took of this beer were all blurred as a result of some shakey-handed photography, so I had to buy another bottle. Shame.